Time for a Jog: The 7 Best Running Routes in İstanbul

Running can offer you a welcome break from the usual tourist trail and help you discover places you would not see otherwise. Particularly in Istanbul, you can get sight and discover the endless hidden treasures of the city while exercising. In this article, we’ll cite the best places to run in İstanbul – all you will need to do is to gear up and sweat off your busy itinerary. Let’s discover İstanbul’s running routes together!

A stroll through the Bosphorus Strait 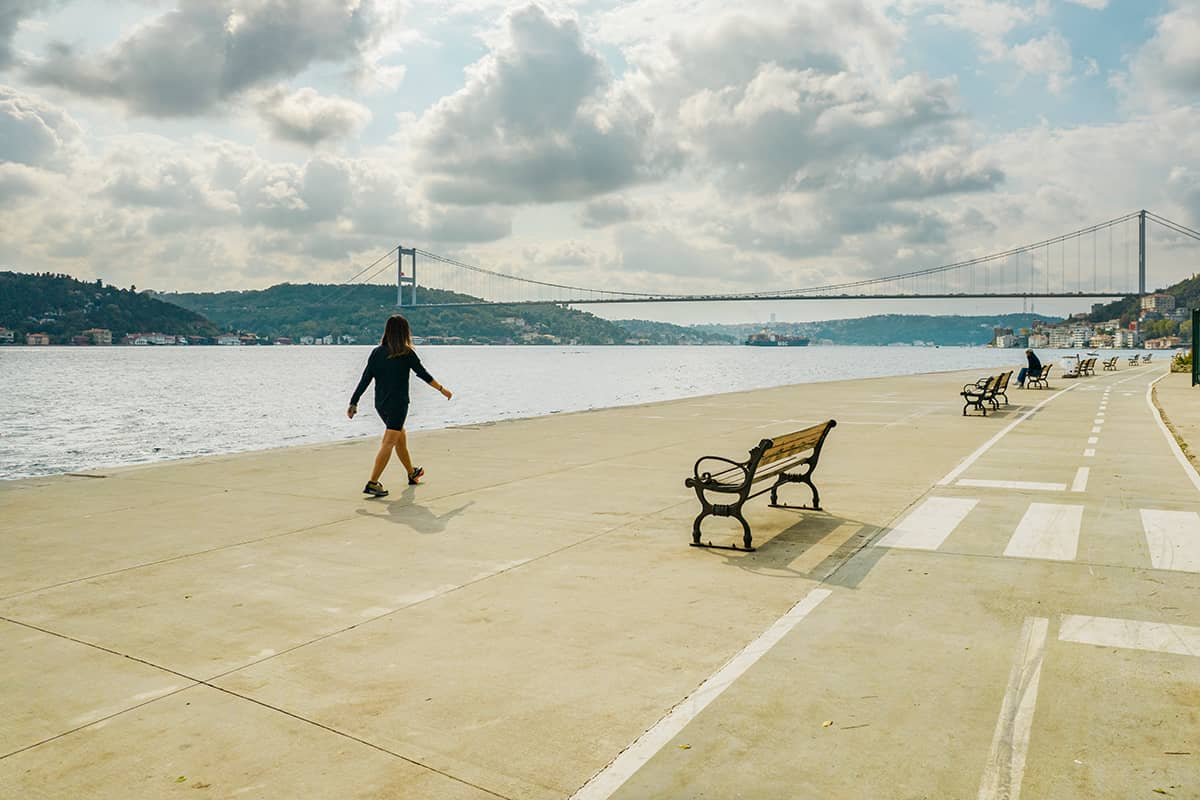 You may already know that İstanbul straddles the Bosphorus Strait, spanning across two continents. Have you ever thought of its coastal neighbourhoods as parts of a running route? Well, you should!

From Kuruçeşme all the way to Tarabya, the best places to run in İstanbul are situated along the most beautiful waterway, Bosphorus. Located on İstanbul’s European side, these districts feature great Bosphorus views that mesmerizes you while running. There are beautiful Ottoman-era mansions and homes, cool boutiques, famous restaurants, and third-generation cafés. If you’d like to take short breaks from running to grab a coffee or simply to sit down and take a deep breath, there are many spots along this route. 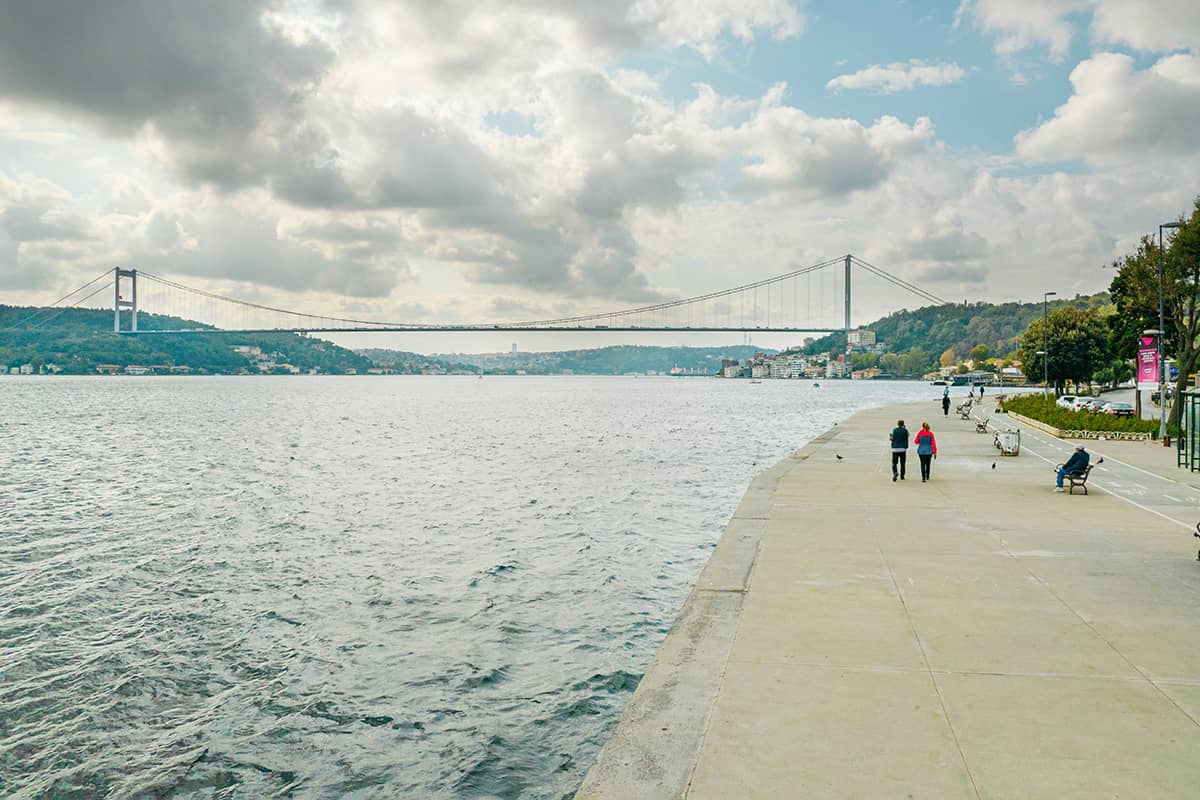 If we were to name a district along the Bosphorus, it would be İstanbul’s posh district of Bebek. Bebek has plenty to boast including a splendid embarkment overlooking the Bosphorus Strait. In this area, and especially near Türkan Sabancı Bebek Park, you’ll encounter many people who like to come here for running.

A 5km circle around the Historical Peninsula 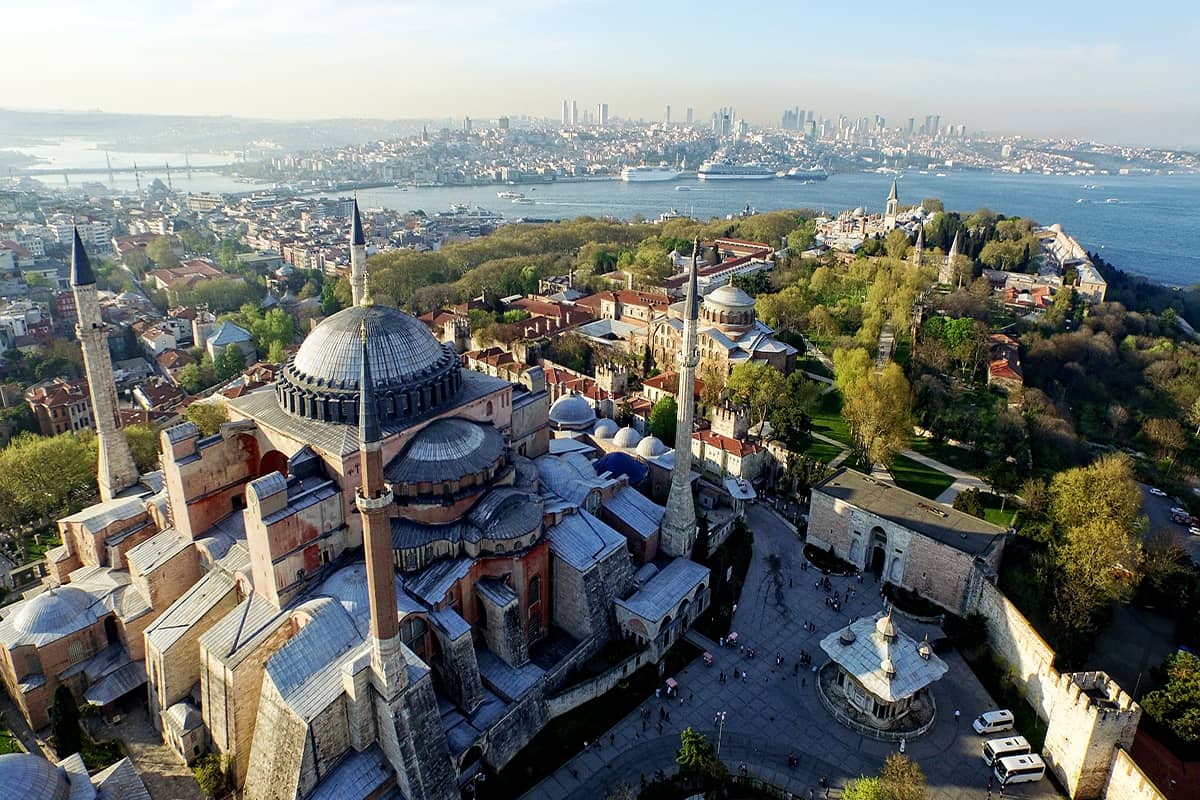 If you’d like a run-seeing tour of İstanbul, we suggest running near Tarihi Yarımada, the Turkish term for İstanbul’s Historical Peninsula. This part of the city features some structures that have in fact become the symbols of the city such as Sultanahmet (Blue) Mosque and Hagia Sophia. However, you should note that you had better to start running early in the morning before the tourists’ flock to the peninsula.

You can start at Sultanahmet Mosque and pass through Sultanahmet Square to arrive at Hagia Sophia and the grounds of the Topkapı Palace. Go through Gülhane Park, which is adjacent to the palace, and arrive at J.F. Kennedy Street, a waterfront path that continues for 4 kilometres.

A waterfront route in the Golden Horn 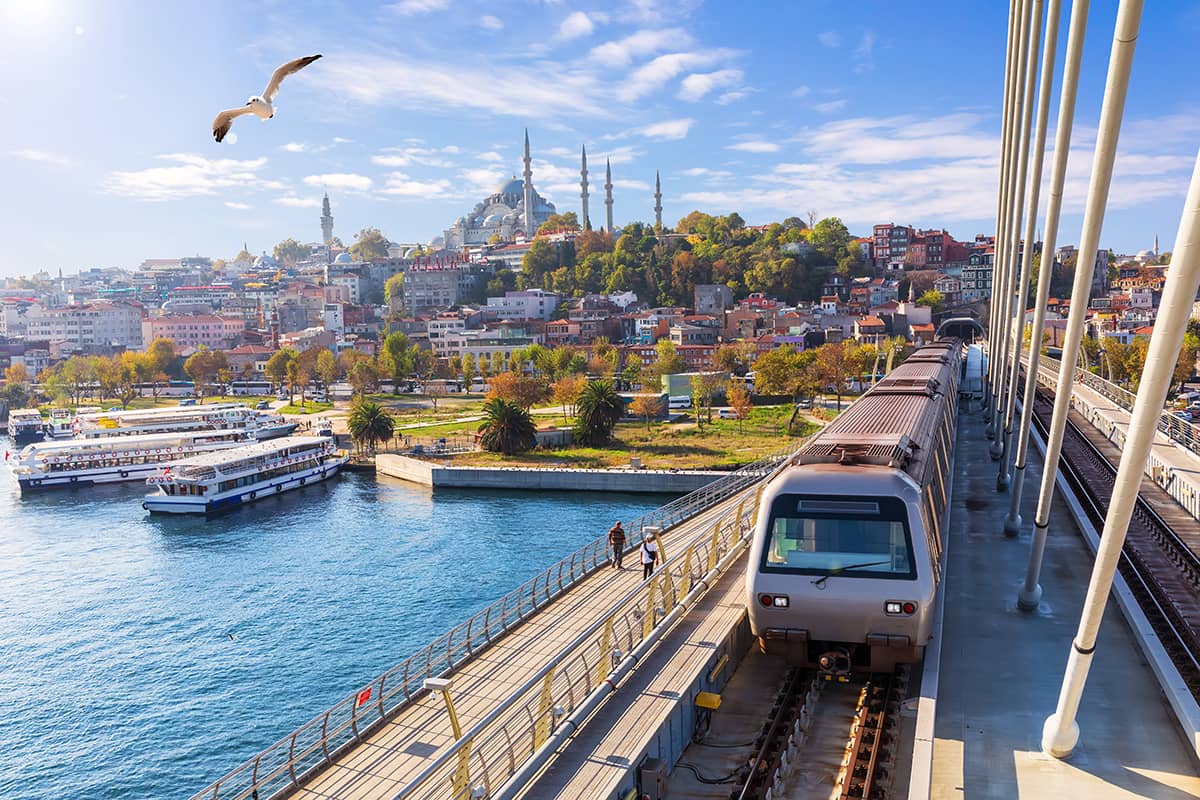 If we got you at “waterfront,” here’s another running route for you: The Golden Horn (Haliç). You can customise running routes of different lengths in this area. You can start at the Galata Bridge and run all the way down to the Haliç or create a shorter route by starting at the Fener (Phanar) neighbourhood and stopping nearby Haliç Park. If you opt for the latter and complete the return route as well, you’ll have a run of slightly less than 7.5 kilometres. 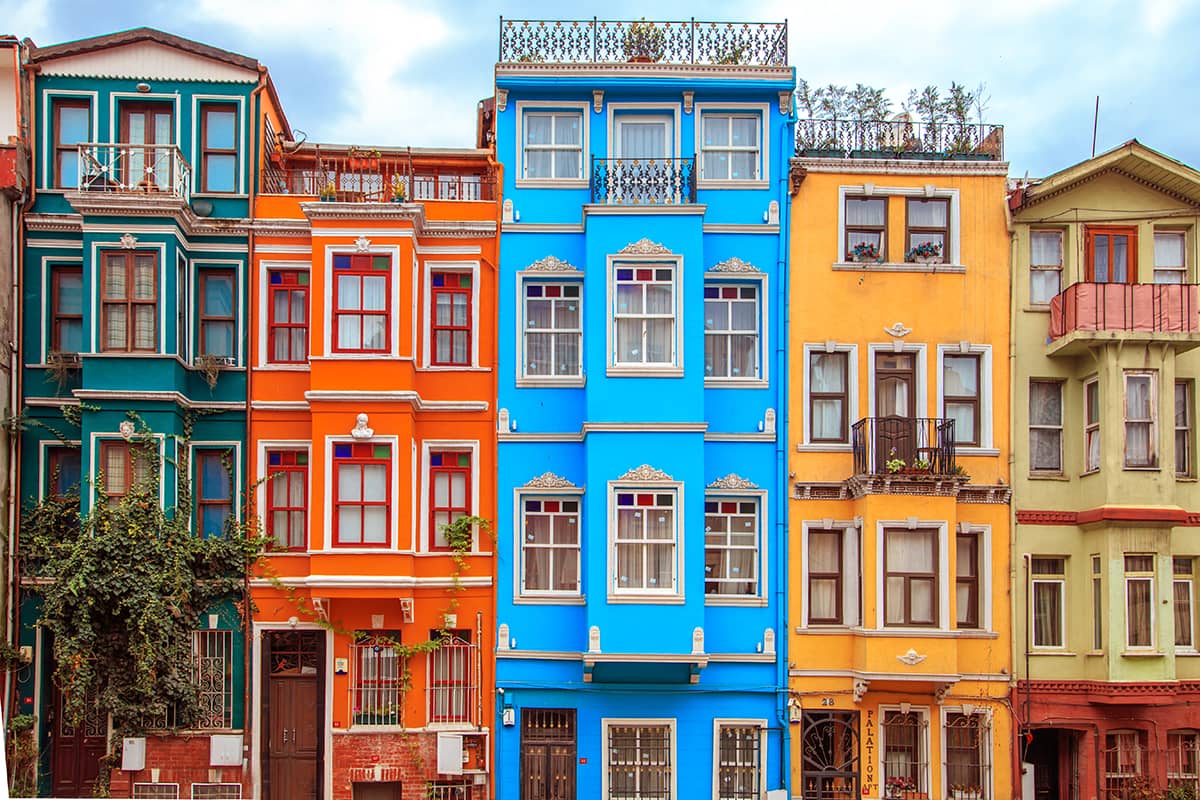 This route, known to the locals as the Balat neighbourhood, has a series of colourful houses which might entice you to stop to click a photo. Similarly, to the other routes, it offers many highlights, including the famous Phanar Greek Orthodox College known as the Red Castle and the İstanbul Greek Orthodox Patriarchate.

For these three first running routes you had better start early in the morning since the routes might be too crowded during the with local and foreign tourists. For more tranquil running routes, you may want to look at the options listed below. 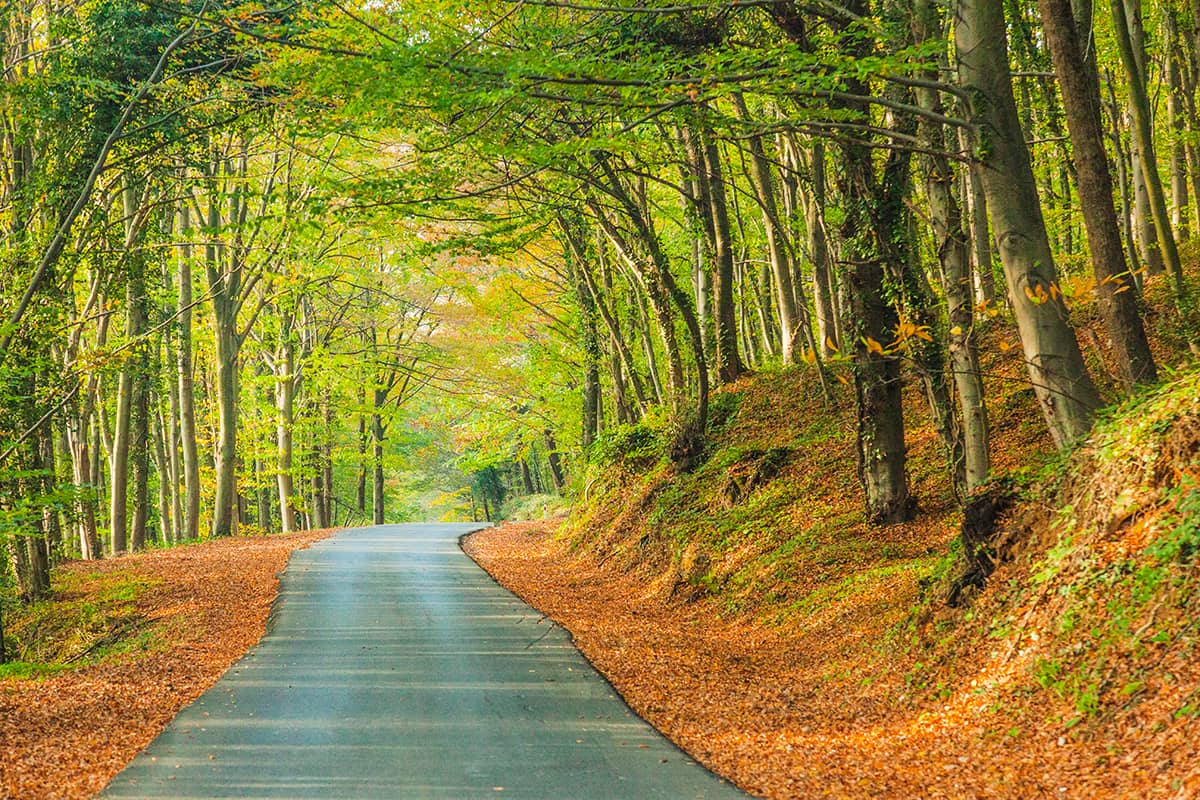 İstanbul has vast forests and running tracks to offer. The two we will mention here are Belgrade Forest and Aydos Forest. Depending on which side of İstanbul you’ll be visiting, you can choose one of them!

Located 15 km north of İstanbul, Belgrade Forest is a shady forest with a lot of hiking and running tracks. It’s perfect all year round and loved by local fitness enthusiasts who come here to exercise in groups. You can customize your running route to whichever length you wish as the forest extends over 5,000 hectares and contains a 6.5 km running track. The forest accommodates a lake, nine nature parks, and many recreational areas. Its lush greenery and rich wildlife are sure to impress you!

There’s also a famous spring in the forest named as Neşet Suyu (Neşet Spring), whose water is drinkable. When you head 2.5 km north of the spring, you’ll arrive at Atatürk Arboretum, a botanical collection of endemic plants and trees situated in Belgrade Forest. 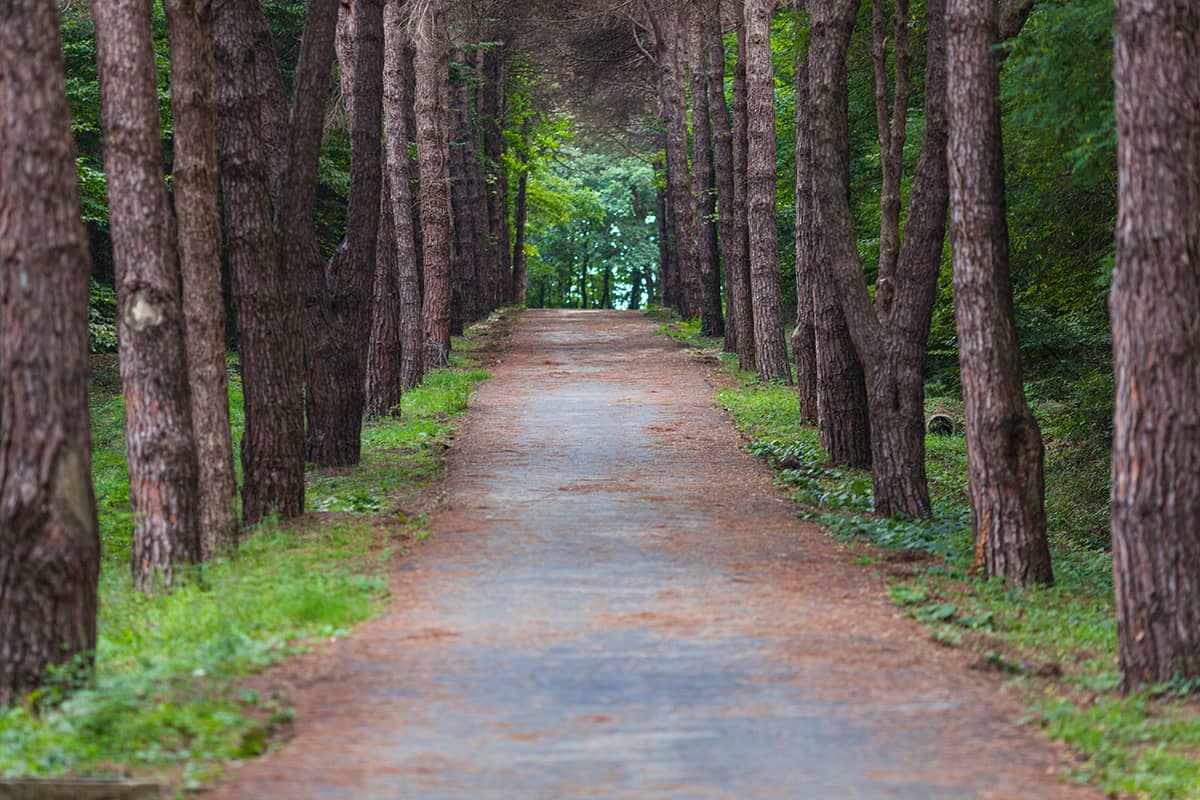 Located in İstanbul’s Kartal district, Aydos Forest’s trailheads are easily reachable by public transportation. The forest covers an area that comprises the highest point of the city and allows you to see the city’s landmarks from a vantage point.

The forest also contains a picturesque lake. If you are staying on the Asian side of İstanbul or have enough time to travel across the city, make sure to visit Aydos Forest.

Waterfront trails on the Asian side 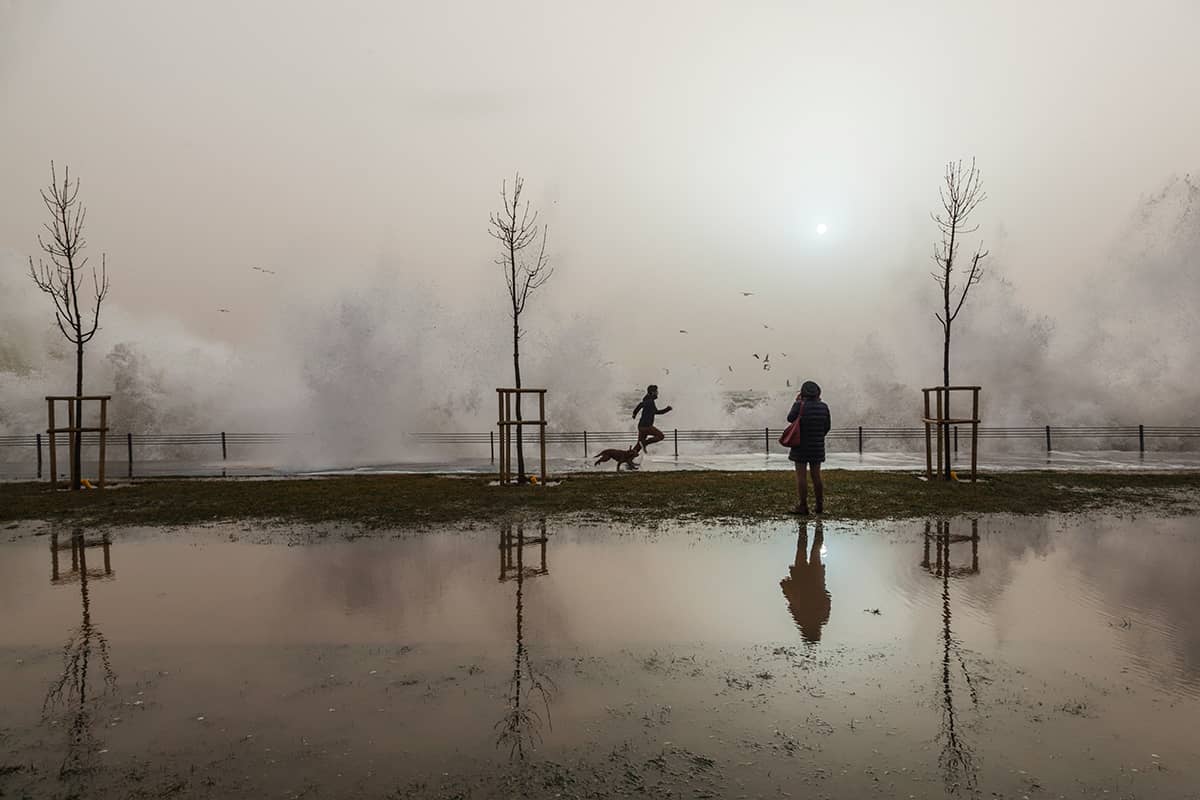 Waterfront running trails on İstanbul’s Asian side include the Caddebostan coast, the Moda coast, and the Dalyan-Pendik coast - the latter being the longest of them all. If you run from Dalyan to Pendik through the coast’s palm-lined parks, your run will reach to a total of 27 kilometres. This running route remains a hidden gem not known to many and is less crowded than the other routes we have mentioned previously. You may also create a shorter route by running along Suadiye-Fenerbahçe which is approximately 6 kilometres long. 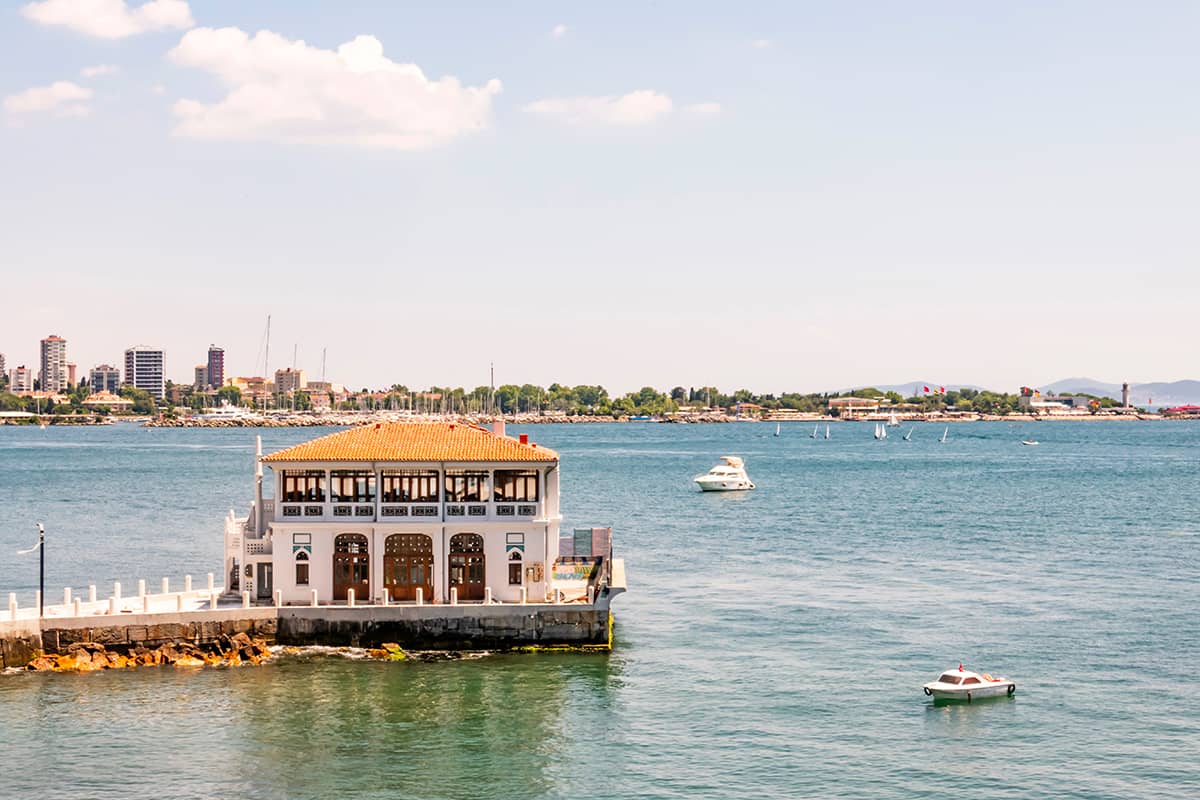 The coast of Moda, one of the most preferred running routes, is located between Kadıköy and Kalamış. It is a 1.2 kilometres track that starts at Yoğurtçu Park and extends to the end of the coast. Without a doubt it’s one of the most idyllic parts of the Asian side.

İstanbul is rich in parks that can easily be visited for a run. We have chosen 4 for you: Maçka Park, Gezi Park, Yıldız Park, and Fenerbahçe Park. 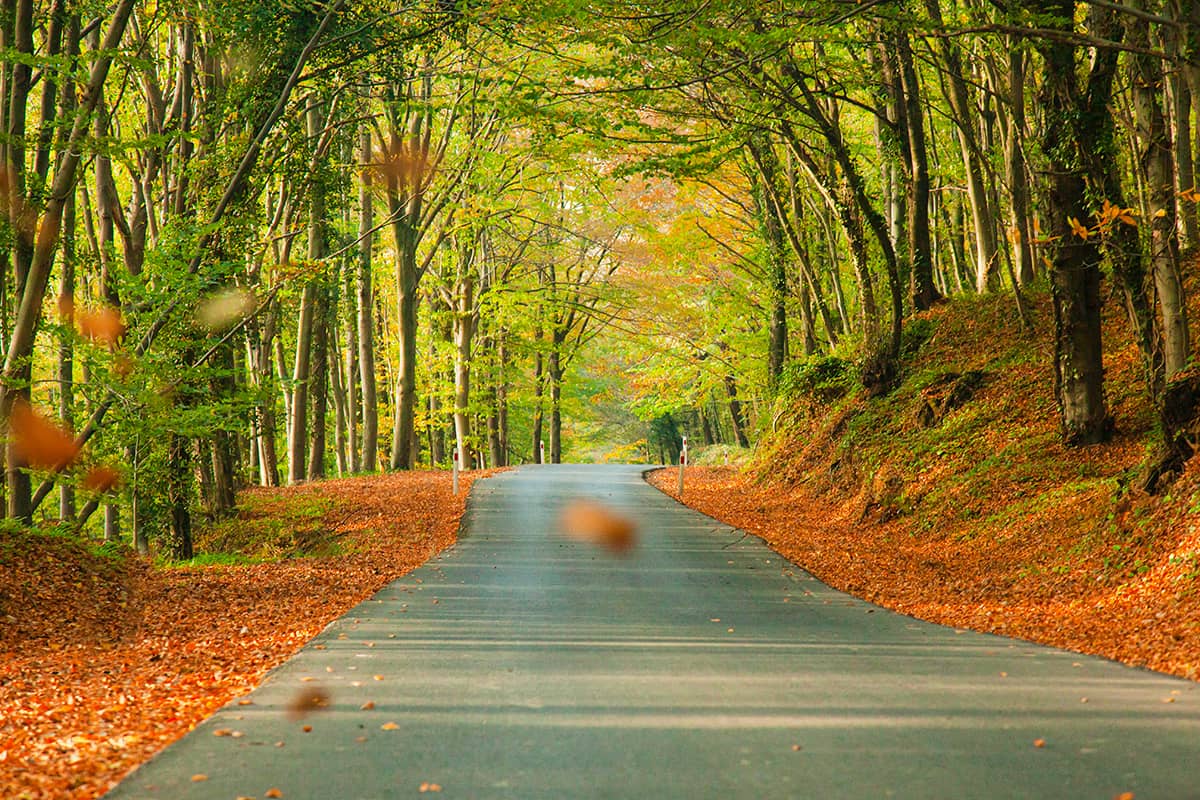 Maçka Park is ideal for mid-level training and stair exercises. The length of the track here is approximately 2.5 kilometres, but it’s quite pleasant and allows you to create a circuit of any length. You could consider Gezi Park as an additional track to Maçka Park as well as they are located really close to each other. For this, you’ll have to start at Taksim Square and run through Gezi Park to arrive at the cable car station adjacent to Maçka. 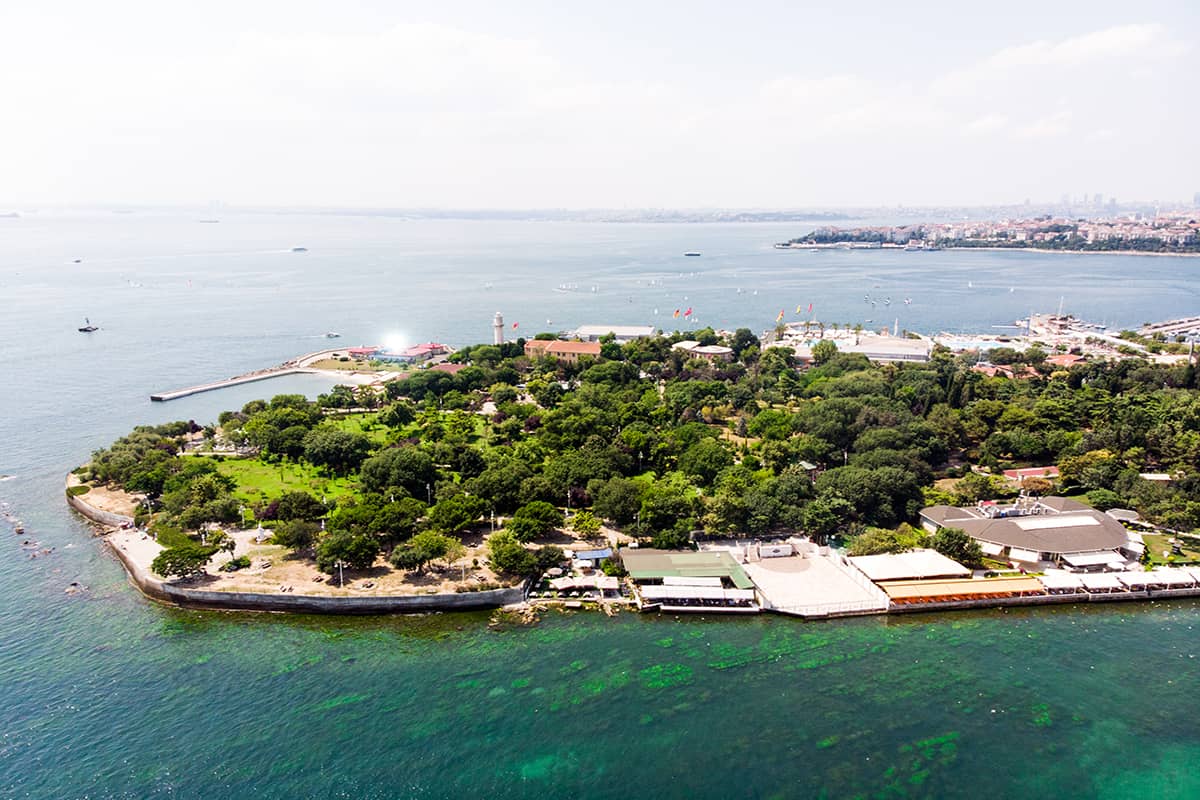 An alternative running route is Fenerbahçe Park, which is situated on the city’s Asian side. This Park comes with awe-inspiring views of the Bosphorus and the Historical Peninsula, which we have pointed out in our “A stroll through the Bosphorus Strait” heading. 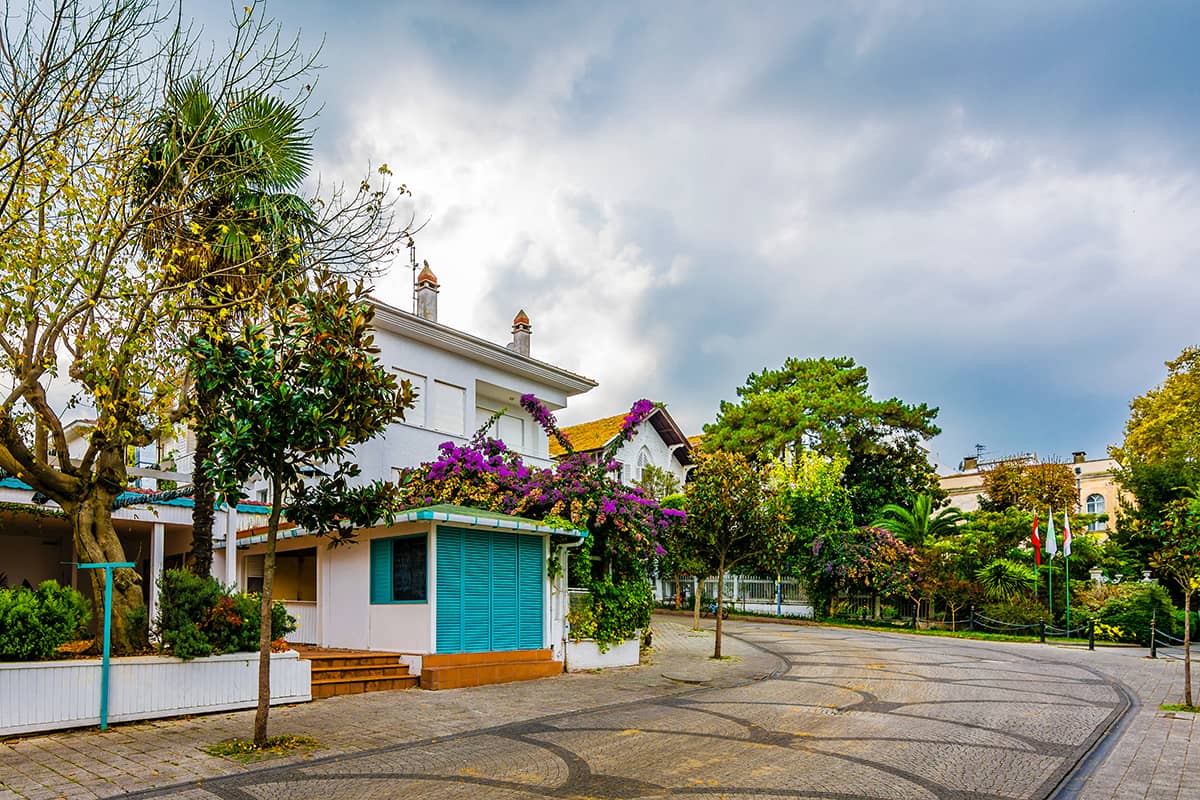 If you make time for a day trip, İstanbul’s Princes’ Islands offer some of the best places to run. We’ve chosen one of the nine islands, situated off the coast of İstanbul in the Marmara Sea - Büyükada. You can customize a circuit of the entire island, following the perimeter road. The view of its Ottoman-era houses and endless greenery is a bonus!

Since the cars are not allowed on the island, you’ll be able to run comfortably - only make sure to watch out for electrical carriages and bikers. It’s recommended you visit the island on weekdays when the atmosphere is generally calmer. Don’t forget to check the timetable for the boat tours.